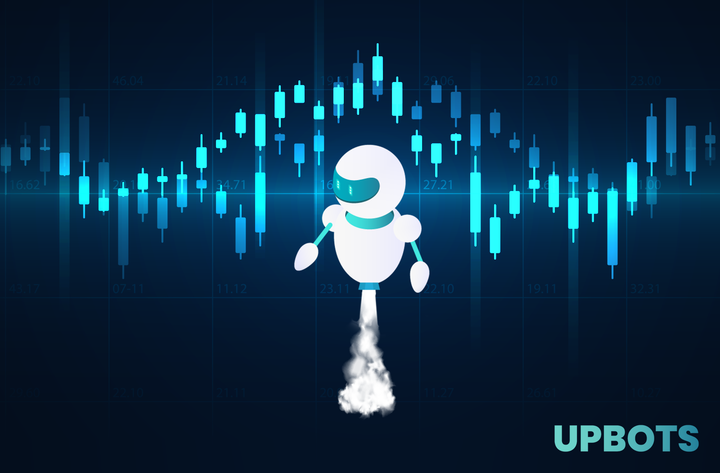 This development is finally solving the issues brought forward by the inherent psychological component of trading. Users are often keen to let sentiment prevail, thereby resorting to actions like unwarranted panic selling following a short-term price drop. Millions are lost every day due to such practices, but there’s hardly a way to deal with personal emotions. Not everyone’s heart is as hard as a rock, but luckily, bots have no emotion. They’re precise sociopaths that always follow through. And UpBots just happens to be building the very best bots, on-top of a fully-fledged trading ecosystem.

The Algo Bots feature represents a key part of UpBots’ infrastructure. The service was designed to facilitate autonomous trading, by giving users the chance to leverage smart and customizable bots to carry out trading on their behalf. In other words, traders will no longer need to invest uncountable hours into analyzing charts and opening positions. The bots will employ trading algorithms that crawl price trends and make viable decisions based on a set of predetermined conditions.

UpBots has recently launched the first version of this feature, which is now available to UBXT stakers on the FTX exchange. These bots are currently deployable on Binance, but soon enough, they’ll be supported by a higher number of crypto exchanges. So far, UpBots has released three separate bots as part of its MVP. These are Optimus BTC, Optimus ETH, and Optimus BNB, and trade against the USDT. It’s important to bear in mind that these bots were designed to long the crypto market, so  their performance is directly correlated to bullish market trends. Those who are looking to short the market will have to wait a bit longer before the short bots are officially released. Luckily, the bots are already showcasing an impressive success rate on their recent trades!

One key benefit of renting Algo Bots is that users will only have to pay the rental fee if the bots prove themselves successful.

While not currently released, this feature will allow traders to create their very own trading bots. The process is incredibly straightforward, as users do not need coding knowledge; rather, they must only possess a conceptualized strategy alongside the ability to click on boxes in order to configure the bots. No other platform can hope to provide a development process that’s this simple.

With the future integration between the Signal Marketplace and Algo Bots, trading algorithms will be able to follow signals sold by leading traders. A quality protocol will be implemented for signal quality assurance purposes.

Albeit sophisticated from a visual standpoint, UpBots’ MVP has proven itself as engaging, rewarding, and straightforward. After logging in, traders are directed to the dashboard – a simple interface that displays data on user portfolio, bot performance, recent trades, and more. On the left side of the screen, users will find a series of quick access keys, which act as a portal towards UpBots’ other features. These include trader wallets, rented bots, UBXT balance, API keys, portfolio monitoring, and much more. A whole suite of other features will be deployed as soon as the full-scale launch of UpBots commences. These include a performance tracker, social copy trading, the signals marketplace, a powerful trading interface, and much more. Advanced functionalities such as the market sentiment tracker will surely revolutionize crypto trading for users worldwide.

Did we mention that UpBots’ portfolio and performance management tool already supports Metamask, Binance, FTX, and BitMex. Integration is a breeze thanks to the sleek interface.

We’ve tested out most of the other MVP features and we’re certainly impressed!

UpBots has been extremely busy, launching feature after feature, and announcing tons of interesting partnerships. Here are a few:

So far, UpBots is proving itself as a next-generation solution for all trading needs. With a strong MVP and new features being announced on an on-going basis, traders can expect to access a powerful, captivating, and profitable trading ecosystem.

Head of the technology.